my name is sanchit malhotra and i'm a composer for visual media, music producer, and performer based out of seattle, washington. my works blend facets of my western and south asian roots, amalgamating influences from Hindustani classical, art rock, hip-hop, cinematic, world music, and more. i sincerely believe in music's power to tell stories and to break boundaries.

some things i'm proud of

earning my Masters degree in Scoring for Film, Television and Video Games from Berklee College of Music, Valencia campus - writing hours of music, collaborating with enormously talented individuals, and getting to perform on campus and around the city in the processco-composing and co-producing ~20 tracks in the Yuva Rhythms album series - featuring an ensemble of 30+ musicians across the U.S. and music spanning genres like indian classical, folk, rock, jazz, hip-hop, electronic, and orchestral.performing live at cities across the U.S. for audiences of up to 1500 as part of the Yuva Rhythms project and with Eclipse Nirvanafounding and directing Georgia Tech’s first ever south asian classical music festival, Khayaal - a platform for up-and-coming south asian classical artistsarranging music for a cappella groups like Georgia Tech’s Taal Tadka, Nothin’ but Treble and Sympathetic Vibrations, winning an ICCA award along the way
and i spend my time
working on various solo projects and collaborations with friends and musicians across the globesinging and playing with various local acts in the seattle music sceneconspiring to keep everyone out my apartment by purchasing as many musical instruments as possiblecontinuing to study hindustani classical musicfinding my peace through guitar, singing, music, and silence on rainy seattle evenings

i believe in music's storytelling power. equipped with intense training scoring for film, tv, and games, i do my best to uniquely enhance stories and elicit their full emotional potential.

The Legend of Zelda: Breath of the Wild (Nintendo)
Gameplay Rescore (Interactive)

I love Zelda games and so I decided to rescore some desert gameplay from Breath of the Wild, with an Indian folk-influenced interpretation. I also integrated my score into a small interactive music simulator I built that shows how music might react to game events in real time.

play the interactive music simulator in your browser! (desktop only)

note: this simulator is a little heavy for browser playback so please be patient with any clicks and pops and/or sync issues :)

Sun Warriors is a top-down multiplayer combat game developed by Angry Avocado, a group of students from the ESAT school in Valencia, Spain. I served as audio director, composed some of the cues and designed some of the sound for this game.

I rescored some of this gorgeous fan-made Majora's Mask cutscene from EmberLab, tapping into some world/folk melodies and rhythms. This music was composed under the direction of Ivana Ancic and the sound design is by Enhui Xia.

Resident Evil 4 is one of my favorite games of all time. Here's my original take on this survival horror masterpiece with some ambient and action-packed music. This score is also integrated with my interactive music simulator to demonstrate how music might react in real time.

play the interactive music simulator in your browser! (desktop only)

note: this simulator is a little heavy for browser playback so please be patient with any clicks and pops and/or sync issues :)

I decided to give my own spin to this iconic game. Enjoy a rock-country influenced interactive rescore set to three different gameplay scenarios (riding, stealth, and combat). This is a transitional/crossfading score implemented with Wwise.

I composed an original electronic-ambient score for this FPS Demo Mini-Game from Unity. This is a vertical remixing-based score implemented with FMOD.

play this game in your browser! (desktop only)

note: this game is a little heavy for browser playback so please be patient with any clicks and pops and/or sync issues :)

Poison, a ZEE5 original, is an Indian Hindi-language web series. I co-composed and co-produced the end credits theme for this action-thriller along with my good friend and frequent collaborator Samarth Srinivasan.

i had a blast rescoring this iconic chase scene from The Incredibles! one of my all time favorite movies. performed and recorded by the Budapest Art Orchestra.

i rescored this quirky sword duel scene from the Spanish language film The Millionaire Dog (a.k.a. Pancho: El Perro Millonario). performed and recorded by the Budapest Art Orchestra.

i rescored this dramatic/romantic scene from the hit TV series Gran Hotel. performed and recorded by the Budapest Art Orchestra.

i believe in music's power to break boundaries. i strive to explore ideas and styles across time and space in the music i make, in constant pursuit of new sounds - through compositions, original songs, covers and more.

a mystical, epic, and Indian classical-infused cinematic composition, based on the Rajasthani folk tale Dhola-Maru. i composed, orchestrated, and produced this piece as part of my Masters thesis project at Berklee College of Music. a true synthesis of musical ideas i love - Indian classical vocals, a motif in 11/8, and an epic narrative arc.

inspired by the 1944 massacre of the inhabitants of the French village Oradour-sur-Glane by a German Waffren-SS Company. Raymond J. Murphy, an American B-17 navigator, witnessed the devastation and the aftermath of the massacre. recorded live in Palau de les Arts, Aula Magistral theater, Valencia Spain.

in eastern religions and philosophies, saṃsāra (संसार) refers to the infinite cycle of birth and death. their teachings liken saṃsāra to an ocean, one whose waves and currents our souls must weather and cross over the course of millions of lifetimes. recorded live in Palau de les Arts, Aula Magistral theater, Valencia Spain.

Into the Gulf (for Woodwind Quartet)

based on the satirical, surreal, and poignant Instructions on How To Cry written by Julio Cortázar. recorded live at Berklee College of Music, Valencia Campus, Ann Kreis Scoring Stage.

Yuva Rhythms is a contemporary devotional album series, featuring ancient Indian hymns, songs, and new compositions set to forward-thinking and modern music production. the upcoming fourth installment in this series centers on the all pervasive feminine power, the Goddess Divine: the Devis. true to the Yuva Rhythms style, this album blends trap, EDM, Indian Classical, celtic, jazz, Indian regional folk, and much more. i composed and produced several tracks in this album along with a team of composer/producers.

Yuva Rhythms is a contemporary devotional album series, featuring ancient Indian hymns, songs, and new compositions set to forward-thinking and modern music production. this third installment in the series explores Lord Ganesha through a myriad of musical styles, ranging from Indian classical to jazz, from art rock to folk, and all sorts in between. i composed and produced several tracks in this album along with a team of composer-producers.

an a cappella mashup of Childish Gambino's III. Telegraph Ave. ('Oakland' by Lloyd) and Manmohini Morey composed by A.R. Rahman and performed by Vijay Prakash from the Hindi film Yuvvraaj that traces expectations, hope, and love from Oakland to Bombay, English to Hindi, and hip-hop to Hindustani classical music.

an electro-orchestral world music interpretation of a traditional tune in praise of Lord Rama.

whatever your musical needs, i'm here to help. 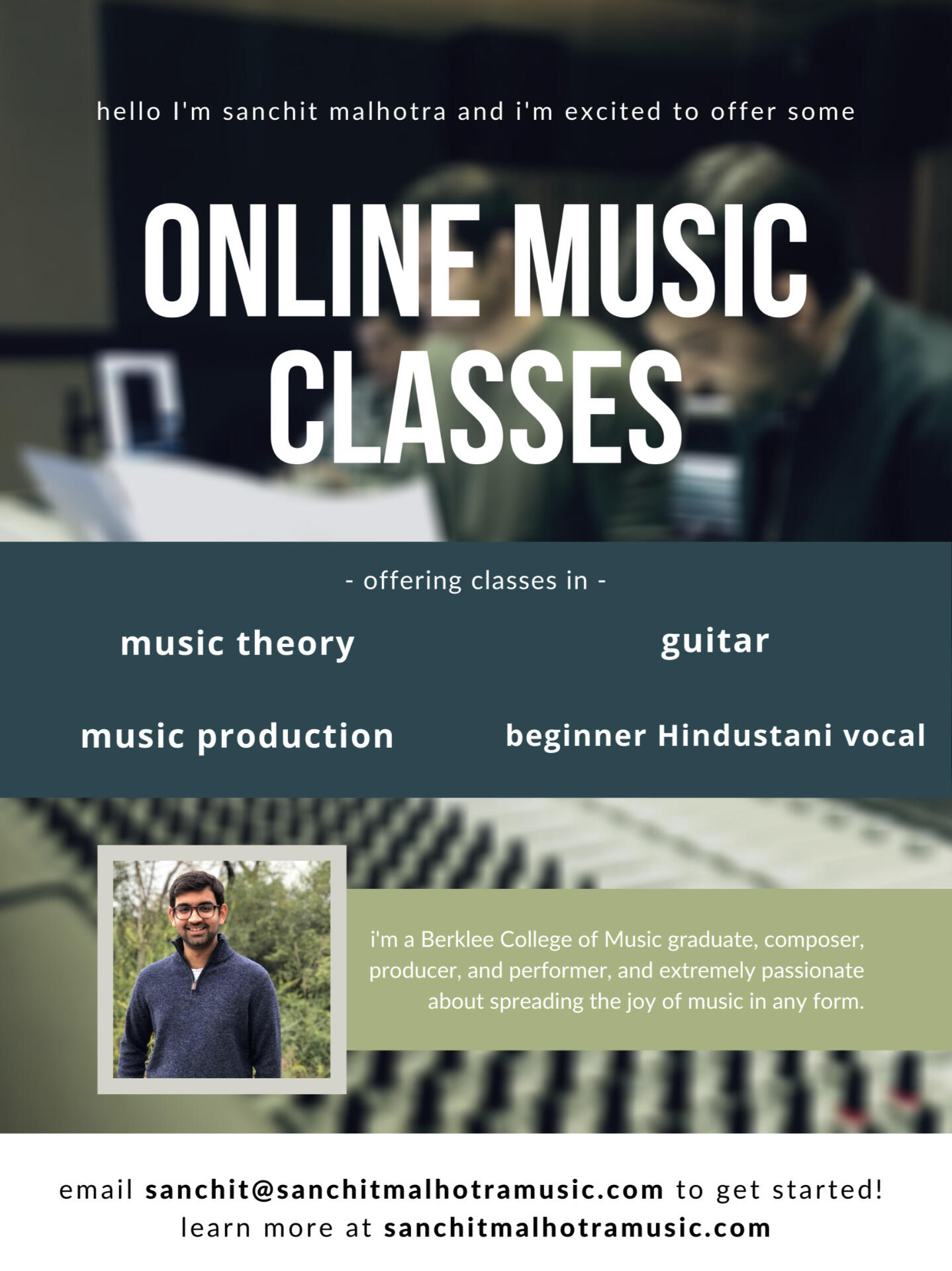 i love teaching and spreading the joy of music in any form! i offer online classes (private and group) and workshops on a variety of topics. please email me at sanchit@sanchitmalhotramusic.com to sign up or for more details.

music theory:
why music works the way it does, tailored to the music you like (all levels)

music production:
how to use a DAW to record and produce your music (all levels)

Intro to Hindustani classical vocal music:
basics of Indian classical music and how to get started singing (beginner)

Fee Details
$40/hour$25/30 minutes
If you sign up before August 31st, get a discount for your first month!
$150/month (4 hour long classes)$90/month (4 30 min long classes)
Payment via Venmo preferred. For other options, please email me!

Class Policies
All classes are conducted via Zoom.If you need to cancel or reschedule a class, please contact me no less than 24 hours before your scheduled time; otherwise, I will have to charge for the class as planned.

i'm eternally excited and curious about all things music. let's chat - drop me an email and keep up with all the latest music, moments, and stories on my channels 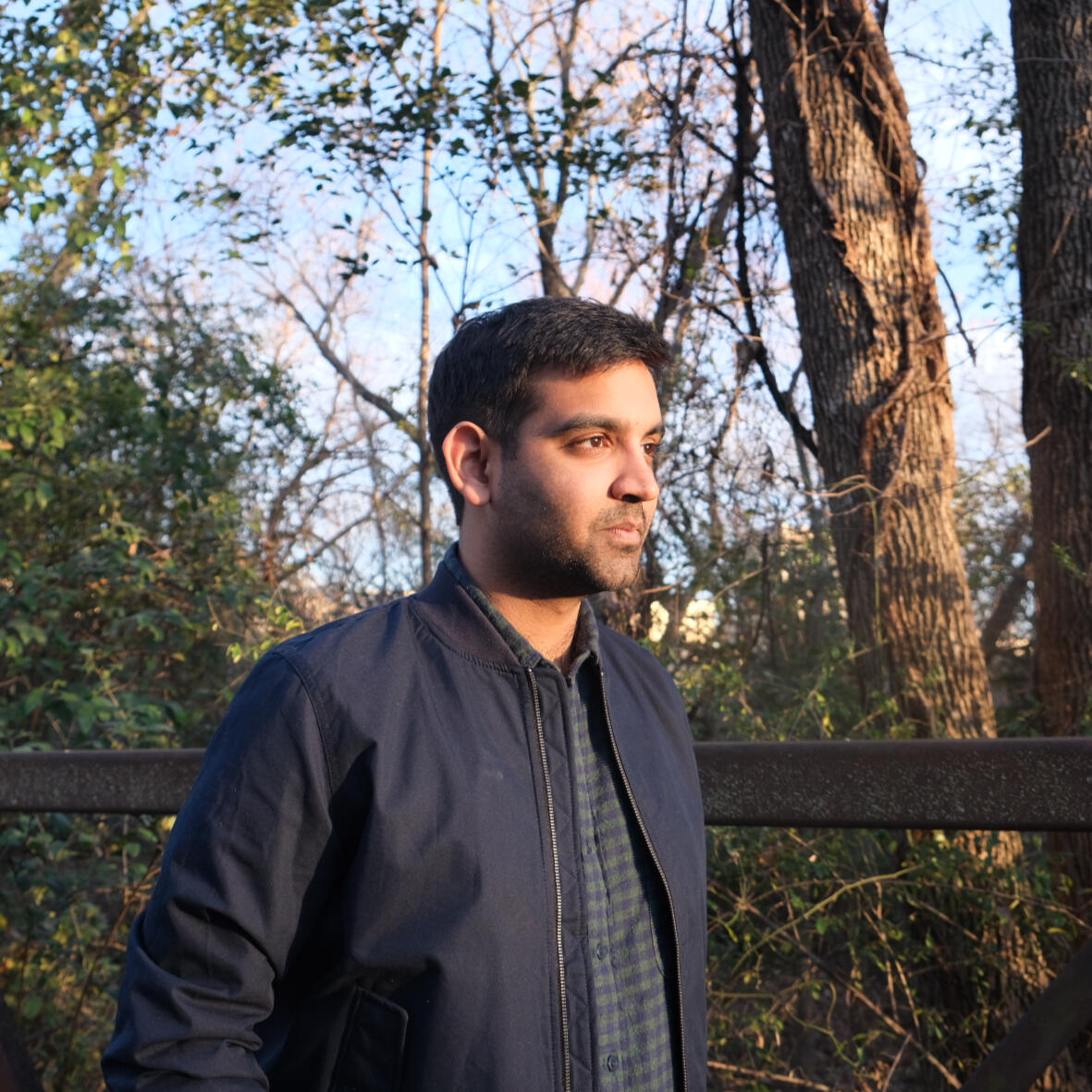